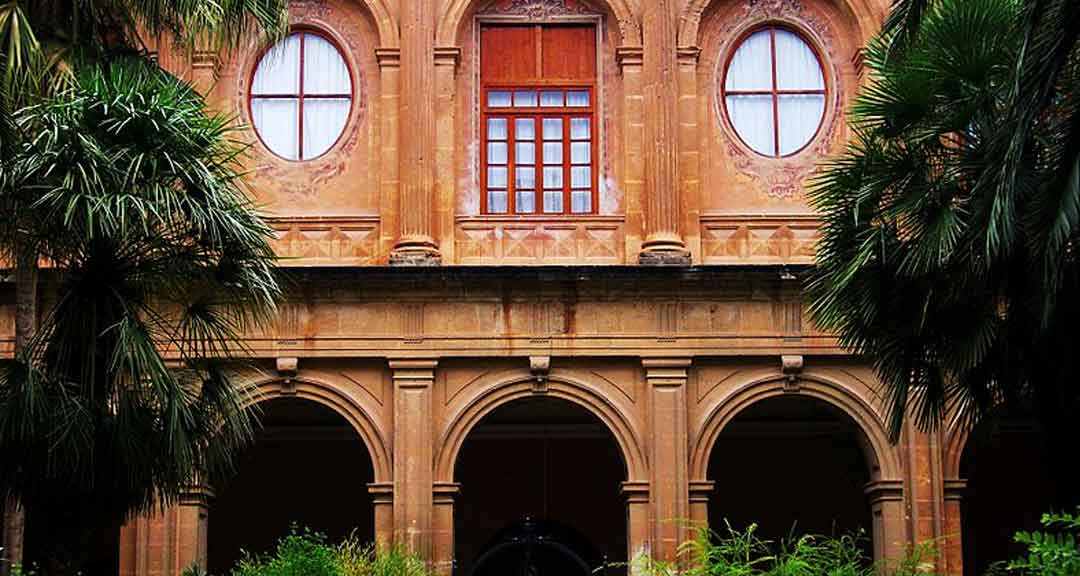 The Santo Domingo Convent originates from the hermitage of Our Lady of Salvation to which the Dominicans moved in 1510. In 1512 the foundation of the convent was approved by Julius II, ratified by Fernando el Católico in 1513 and by Carlos I in 1528.

In 1547, Fernando de Loazes from Orihuela, then Bishop of Lérida, founded a Dominican school in this humble convent to impart religious teaching of the Order of Preachers, granting it various donations which were ratified and extended in 1549 and 1555. In 1552 by Papal Bull from Julius III, the founding and endowment of the Our Lady of Salvation of Orihuela school was approved, giving academic validity to the degrees taught there.

On the 4th of August 1569, by a Papal Bull from Pius V, the general study or university was created in the school. This did not begin to operate until 1610, Felipe IV approving the University statutes in 1655. There, various teachers of Theology, Law, Medicine, Canons and Arts taught until for political and economic circumstances it was definitively shut down in 1824.

It remained a dominical school until the confiscation of church property in 1835 and abolition and expulsion of religious orders, when it disappeared, becoming a state building, made into a teacher training college. In 1864 the State awarded it to the Diocese of Orihuela. In 1872 it became the Colegio de Santo Domingo la Compañía de Jesús until 1931 when it was seized by the state to create a high school. In 1935 it was returned to the diocese, during the Civil War it was converted into a Police Academy, and at the end of the war it was returned to the Jesuits until 1956, when the order moved to Alicante, the school being returned to the Diocese of Orihuela until today.

Since 1998 it has been a university headquarters, thanks to the creation of the “Fernando de Loazes Academy”, belonging to the University of Alicante.

The Convent-School was planned in 1553 by Jerónimo Quijano and constructed during the second half of the 16th and the whole 17th century. Juan Inglés was in charge of the works from 1553 until his death in 1563, Agustín Bernardino being in charge from 1602. The building underwent significant renovations in the first half of the 18th century. It is a clear example of a synthesis of the Renaissance, Mannerist and Baroque movements.

It is a large building made up of a church, convent and school, built in various phases and affected by earthquakes which made the reconstruction of some of its elements necessary. It is characterised by a great monumentality, markedly horizontal facades, accentuated by mouldings on its lower section, mouldings separating floors and cornices, truncated horizontals on the three doors and some profusely decorated windows.

The southern facade is designed as the main viewpoint of the building. It is divided into three separate floors by cornices with three doors:

The eastern facade is much more modest, and the lower floor is a work of masonry, due to the nearby Arrabal de San Juan blocking its view. It has the same general structure as the main facade, on which there is a notable coat of arms of Fernando de Loazes, richly sculpted with windows located at the ends of the corridors of the first and second floors.

The interior of the building is constructed around two cloisters for the main departments and a rear patio for servants.

From the Cloister of the School some of the main departments can be accessed, such as:

The Refectory, a work from the end of the 16th century, a large rectangular room covered by ribbed vaults, in various sections, separated by barrel arches which are supported on attached arches decorated with plant motifs.

The Sacristy has two contiguous rectangular spaces, the sacristy and rear sacristy. A notable feature is the rear sacristy half barrel-vaulted roof decorated with panels with diamond shaped points, dating to 1593, and the sacristy access door, designed by Juan Inglés and sculpted by Francisco de Ayala, between 1581 and 1584. With a triumph arch shaped structure with clear classical and plateresque inspiration, the main theme is the Annunciation, decorated with grotesques, cherubs and the heraldry of Fernando de Loazes.

The Church has a single nave with chapels between buttresses, a transept and polygonal chancel, covered with a half barrel-vaulted roof with lunettes in the nave, a dome on spandrels in the transept and a scalloped cap in the chancel. It was reconstructed in the second half of the 17th century in a project by Pedro Quintana, replacing the former construction. The presbytery and main door of the primitive church were preserved (described above). In 1690 a decoration programme for the church was initiated, with the participation of masons, sculptors, gilders and painters, notably Laureano Villanueva, Bartolomé Albert, Antonio Villanueva, and Pedro Camacho, among others.

The organ, with a baroque case in natural wood, was made by Matías Salanova in 1738 and refurbished in 1908.

The tower was created between 1738 and 1739 in brick, sculpted, plastered and painted.