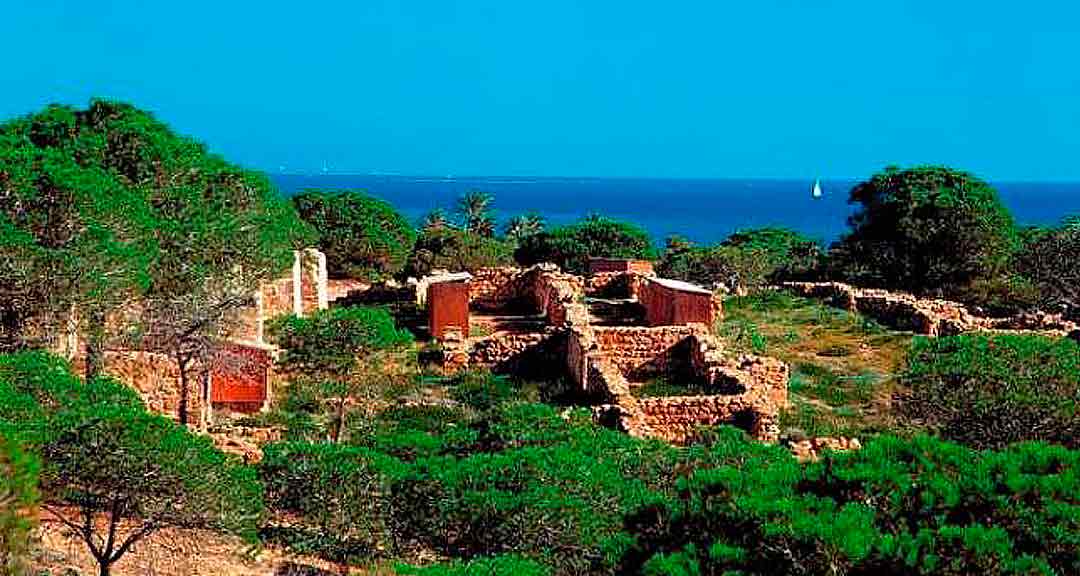 Location: In the dunes of Guardamar, close to the mouth of the Segura river.
Chronology: A founding stone dates the site to the year 944 AD. It was abandoned in the middle of the 11th century.

The Rábita Califal of the Dunes of Guardamar del Segura is the only Islamic monastic complex from the Omeya Andalusí period (10th-11th century) which is almost fully preserved. This was possible thanks to the fact that after its abandonment in the middle of the 11th century, due to the subsequent civil war which the Caliphate underwent, the whole rábita remained buried and protected from the aggressions.

It spent almost nine hundred years this way, hidden under the sand, until 1897, during reforestation works, when a tablet was found with Arabic inscriptions.

Engineer Francisco Mira i Botella, in charge of the pine reforestation, ordered its translation, which said:

“In the name of Allah, the Merciful, the Compassionate, there is no God but Allah and Mohammed is his prophet. This mosque was finished in the month of Almoharren in the year three hundred and thirty three (944 in the Christian era). It was ordered to be constructed by Ahmed, son of Bojul, son of the daughter of Alwatsecbilá, seeking the reward of Allah. It was made with the help (under the direction) of Mohammed, son of Abusalema, a work of Aben Borracha the builder”.

The discovery did not have any archaeological impact until 1984 when it was decided to find the building that the tablet spoke of. In this way and with different archaeological campaigns the two thirds of the complex which can be visited were unearthed. The Rábita is made up of approximately 22 oratory cubicles, each with its own mihrab. These cubicles are organised around two main streets, and are of various sizes and finishes. Notable are the mosque complex (smaller than those constructed in the cities during the Omeya Caliphate) located in the central area and the row of cubicles located in the central north area, among which is the visitor welcome cubicle where a multitude of graffiti is preserved.

In this monastery the religious, the faithful creating the ribat, and pilgrims lived together, all attracted by the spiritual retreat which Islam requires of its worshipers. The oratory cubicles serve as a place of prayer, as well as a place for accommodating daily needs. The excavations have brought a multitude of objects to light, some related with religious rites (rosary beads) and others linked with daily lives (lamps, cauldrons, water pitchers, jugs, etc.).